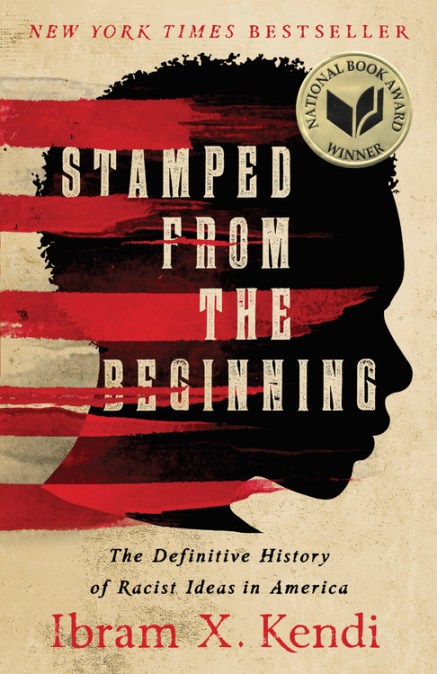 Stamped from the Beginning

by Ibram X. Kendi
The National Book Award winning history of how racist ideas were created, spread, and deeply rooted in American society.

Some Americans insist that we’re living in a post-racial society. But racist thought is not just alive and well in America — it is more sophisticated and more insidious than ever. And as award-winning historian Ibram X. Kendi argues, racist ideas have a long and lingering history, one in which nearly every great American thinker is complicit.

As Kendi shows, racist ideas did not arise from ignorance or hatred. They were created to justify and rationalize deeply entrenched discriminatory policies and the nation’s racial inequities.

In shedding light on this history, Stamped from the Beginning offers us the tools we need to expose racist thinking. In the process, he gives us reason to hope. 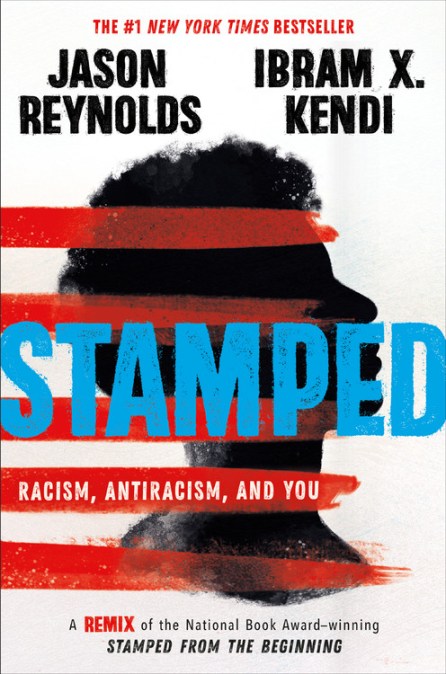 Stamped: Racism, Antiracism, and You

by Jason Reynolds by Ibram X. Kendi
The #1 New York Times bestselling, “must-read” (San Francisco Chronicle), “amazingly timely and stunningly accessible” (Jacqueline Woodson) exploration of race and racism from award-winning, beloved authors Jason Reynolds and Ibram X. Kendi, now in paperback.
This is NOT a history book.
This is a book about the here and now.
A book to help us better understand why we are where we are.
A book about race.

The construct of race has always been used to gain and keep power, to create dynamics that separate and silence. This remarkable reimagining of Dr. Ibram X. Kendi’s National Book Award-winning Stamped from the Beginning reveals the history of racist ideas in America, and inspires hope for an antiracist future. It takes you on a race journey from then to now, shows you why we feel how we feel, and why the poison of racism lingers. It also proves that while racist ideas have always been easy to fabricate and distribute, they can also be discredited.

Through a gripping, fast-paced, and energizing narrative written by beloved award-winner Jason Reynolds, this book shines a light on the many insidious forms of racist ideas–and on ways readers can identify and stamp out racist thoughts in their daily lives.
Download the free educator guide here: https://www.hachettebookgroup.com/wp-content/uploads/2020/03/Stamped-Educator-Guide.pdf 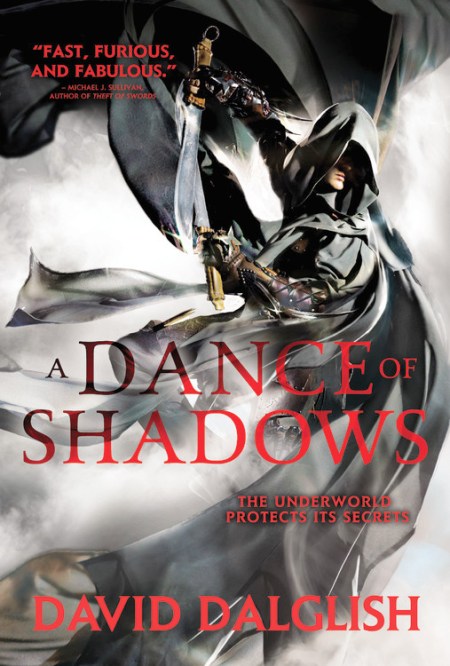 A Dance of Shadows

“Prove that you can stand against the darkness and live.”

In book #4 of the Shadowdance series, Haern is the King’s Watcher, born an assassin only to become the city of Veldaren’s protector against the thief guilds.

When Lord Victor Kane attacks the city, determined to stamp out all corruption, foreign gangs pour in amidst the chaos in an attempt to overthrow the current lords of the underworld.

And when a mysterious killer known as the Widow begins mutilating thieves, paranoia engulfs the city. Haern knows someone is behind the turmoil, pulling strings. If he doesn’t find out who — and soon — his beloved city will burn.

Light or darkness: where will the line be drawn?

Fantasy author David Dalglish spins a tale of retribution and darkness, and an underworld reaching for ultimate power in this fourth novel of the Shadowdance series, previously released as Blood of the Underworld. 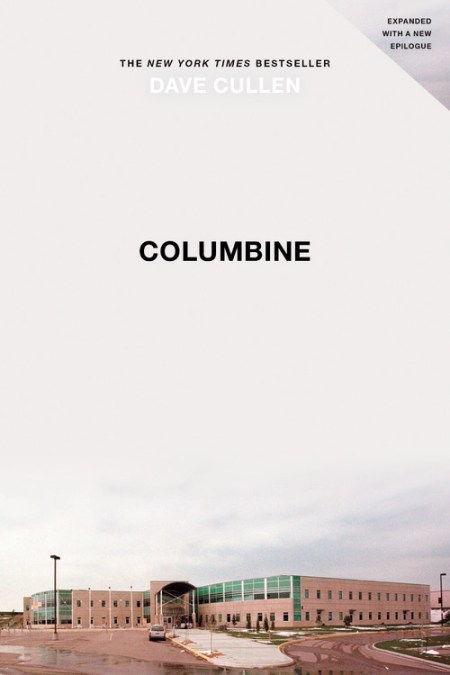 by Dave Cullen
Ten years in the works, a masterpiece of reportage, this is the definitive account of the Columbine massacre, its aftermath, and its significance, from the acclaimed journalist who followed the story from the outset.
“The tragedies keep coming. As we reel from the latest horror . . .”

So begins a new epilogue, illustrating how Columbine became the template for nearly two decades of “spectacle murders.” It is a false script, seized upon by a generation of new killers. In the wake of Newtown, Aurora, and Virginia Tech, the imperative to understand the crime that sparked this plague grows more urgent every year.

What really happened April 20, 1999? The horror left an indelible stamp on the American psyche, but most of what we “know” is wrong. It wasn’t about jocks, Goths, or the Trench Coat Mafia. Dave Cullen was one of the first reporters on scene, and spent ten years on this book-widely recognized as the definitive account. With a keen investigative eye and psychological acumen, he draws on mountains of evidence, insight from the world’s leading forensic psychologists, and the killers’ own words and drawings-several reproduced in a new appendix. Cullen paints raw portraits of two polar opposite killers. They contrast starkly with the flashes of resilience and redemption among the survivors.

Expanded with a New Epilogue 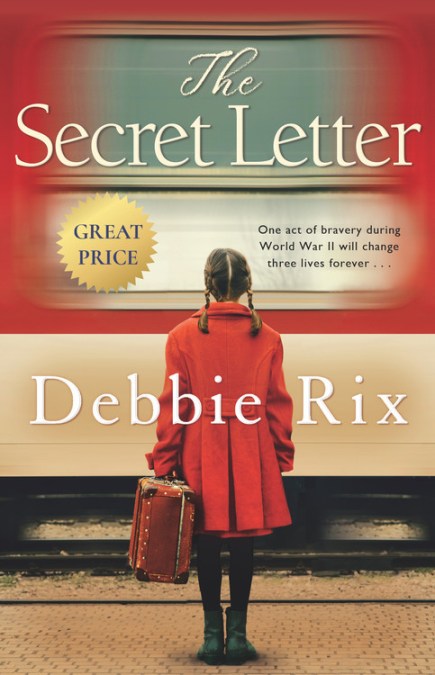 by Debbie Rix
Inspired by a true story, this historical novel is a heart-wrenching, unforgettable tale of one young girl who refuses to give up on what she believes in and the strength of human kindness in a time of unimaginable heartbreak.

London, 2018: When ninety‑four‑year‑old Imogen receives a letter addressed to her in neat, unfamiliar handwriting, she notices the postmark is stamped from Germany—and it sends shivers down her spine . . .

Germany, 1939: Thirteen‑year‑old Magda is devastated by the loss of her best friend Lotte, cruelly snatched from her and sent to a concentration camp—the Star of David sewn on her faded brown coat. As the Nazis’ power takes hold, Magda realizes she’s not like the other girls in her German village—she hates the fanatical new rules of the Hitler Youth. So she secretly joins The White Rose Movement and begins to rebel against the oppressive, frightening world around her.

But when an English bomber pilot crashes nearby, she is faced with an impossible choice: risk the safety of her family or save a stranger and make a difference in the devastating war that has claimed the lives of so many. Little does she know, her actions will have the power to change the life of another girl, on the other side of enemy lines, forever. 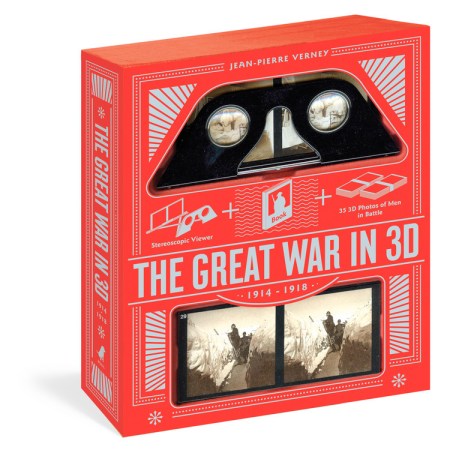 This innovative kit includes a full-color illustrated book and keepsake stereoscopic viewer with 35 stereoscopic photographs of some of the most compelling moments captured on film during World War I. It takes readers and fans of films like 1917 and They Shall Not Grow Old on to the battle grounds, reading the words of soldiers, sailors, officers, and loved ones at home, on all sides of this conflict.

From the beginning of the war in 1914 to the signing of the treaty in 1918, advances in photography and technology produced remarkable chronicles of daily life in the trenches, in POW camps, and back home. The Great War in 3D shares some rare, poignant, and telling moments through these images. It also reveals how innovations and advances also gave rise to a new kind of censorship or propaganda, and new responses of patriotism and revolution.

The Great War in 3D includes: